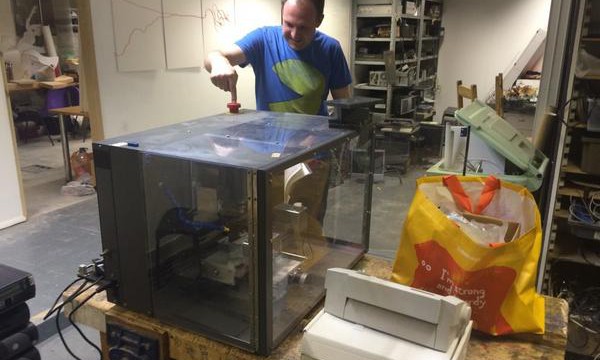 As the whole making movement is quite popular now, and I’m lucky enough to have been making a living by making stuff all my life (from furniture to silver rings), I’m now a member of an art/maker space called Create Space London.
http://createspacelondon.org

Fitting a CNC machine with a mach 3 board. A few months ago, Create Space London (CSL) was donated some old CNC machinery from a school. The machine wasn’t working and we finally made a start and replaced the existing electronics with some parts from eBay.

After loads of (re)wiring, a leaking capacitor of the power supply, blowing up some ports of the parallel port driver, I got the steppers moving

As a capacitor started to leak in the original power supply, I needed another one.
I looked around in the racks filled with old and obscure equipment at CSL, but no luck finding a capacitor.

As there where loads of stripped down PC’s laying around, I decide to use a PC power supply. I looked up a wiring diagram on the internet and connected the power supply to the machine.

As I thought it was going to be hard to make the calculations for the necessary steps needed for an accurate movement, I used the mach3 auto calibration tool.
Although it might not be as accurate as a proper calculation, for me it worked fine.

Still to do: The spindel. As we also have an MDX 15 mill machine, I had a go with it as well.

The software is a bit more closed than mach3, but very easy to use.
I think using this machine is quite good to understanding the process of CNC milling.
One problem I ran into was that, as the mill is configured like a printer under Windows, the printer’s spooler was not empty and the computer needed restarting to fix this.
Later on I found a quicker work-around for this.

Another quite annoying fact is that the milling file is stored on the milling machine. So you can’t control with the software what the machine is cutting.

Some MDX 15 MDX 20 hardware mods, such as a Proton spindel holder